You asked…so fix a cup of tea, and sit with me a while! 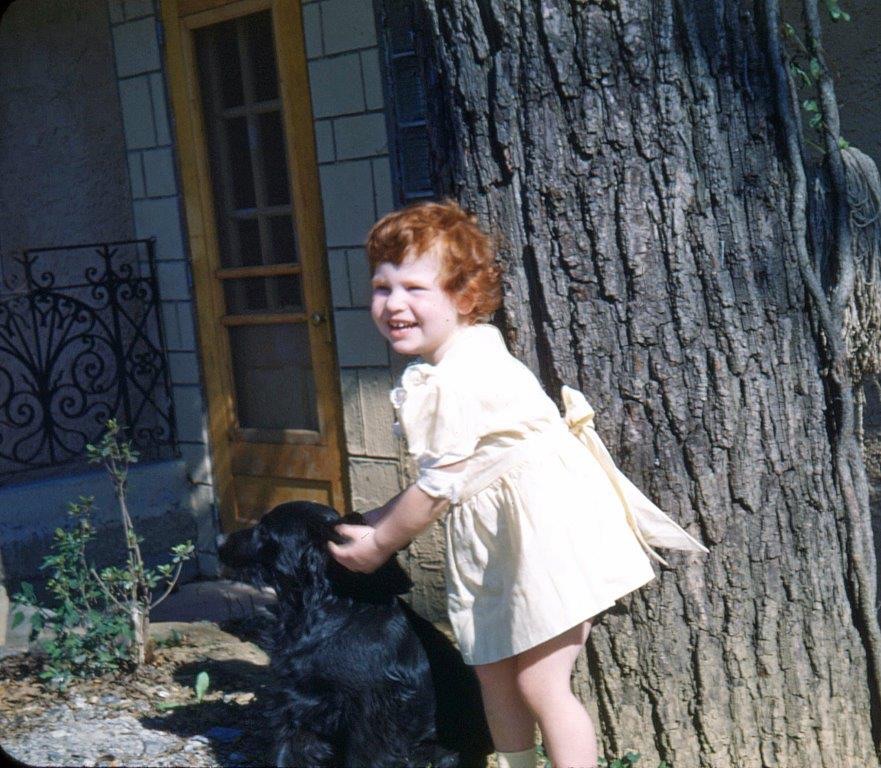 I was born in Pennsylvania, but we moved to RURAL South Carolina when I was a toddler. Truly rural—there were 2 general stores and a tiny post office across from the train stop, with a population of 50 people.

When I was 9, an older cousin who was visiting from Florida read my palm—that captured my imagination!! But then in South Carolina in the 1950’s and ’60’s, there was little likelihood of further access to information on palmistry or astrology–I was limited to reading the horoscopes in the Dubbl-Bubbl Bubblegum wrappers to sustain my fascination. With minimal exposure, the interest necessarily dimmed over the years. An onslaught of other life things took over, like school (BS in Biology), work, marriage and later–as a single parent–making a living and raising my son; add in more education and Professional certifications (Procurement and Contracts). The years passed; the interest lay dormant, except for occasional pop-up articles or events. I bought a Tarot Deck in 2002 and for a short time it was a diversion.

I didn’t allow myself to be immersed in Astrology until I retired. A month after retiring I spent 2 weeks by myself at the beach in Bluffton, SC where I worked with the Tarot, watched you-tube videos and just enjoyed the serenity of the May River. Since that time, I have studied, you-Tube’d, webinar’ed and conferenced pretty much constantly.

Later the year I retired, I had volunteered at my Granddaughter’s elementary school library; I quickly noticed there was not a single book that remotely touched on Astrology. On a mission, I scoured the libraries in this largest Virginia county, and on Amazon, and could find only books for older kids/teens—many outdated. Hmmm, I could write a book for children…

The ‘seed’ was planted.

While my ‘seed’ book(s) were evolving slowly on notes and scribbles, my mind wandered to…creating playful things other than books, that may help stimulate learning the basic building blocks of Astrology. And understandably, I defaulted to the fabric store! I know, not everyone would run to a fabric store… 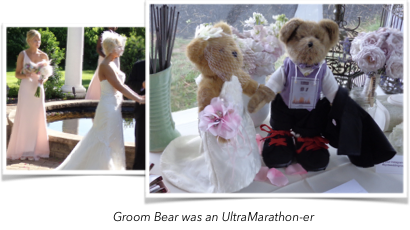 Understandably, I say, because there is significant history (qualification?) for the detour: On many occasions over the last 35 years I have made ‘wedding bears’ for my friends and their children who were getting married. I would copy and hand-sew Bride-bears’ wedding dresses, which were close replicas of each Bride’s gown; yes, they did fit a bit differently, but each bride definitely recognized ‘her’ dress. I incorporated her Bridesmaid colors, flowers and other items unique to her wedding.

So, it was not such a stretch that I would morph/default to making fabric planets, and stylizing each planet with fabric correlating to its character, personality–eg., Venus is a lush green velvet with ‘diamonds’; Saturn is a business-suit gray tweed with a belt.

These were fun, but it was not practical for me to custom sew the huge number of planets needed for the learning tools already being envisioned…and fabric/time was certainly not cost-effective.

To test out my little creations and possibly gather more ideas, I took some of the early toys to Astrology conferences and workshops. I made big planets and little planets; some had googly eyes and played on swings or see-saws; others were displayed with emojis to pique correlation with the planets.

The first display was at the First Vibrational Astrology conference in Gainesville, Florida in April, 2019.

Pluff’ planets—named for the soft, fluffy Pluff mud found at many South Carolina beaches—are small stuffed pillows with personality. Many of the 100 Astrologers attending the Vibrational Astrology conference spent their break time selecting and applying the commercial emoji stickers that I had on the table. Each chose the emojis they felt personified the particularly planet—in much the same way I selected the fabrics. One Astrologer from Utah called her daughter and sent pictures so that her daughter could select the emojis!

Months later that year, the Pluff Planets stepped out again…this time to Baltimore. 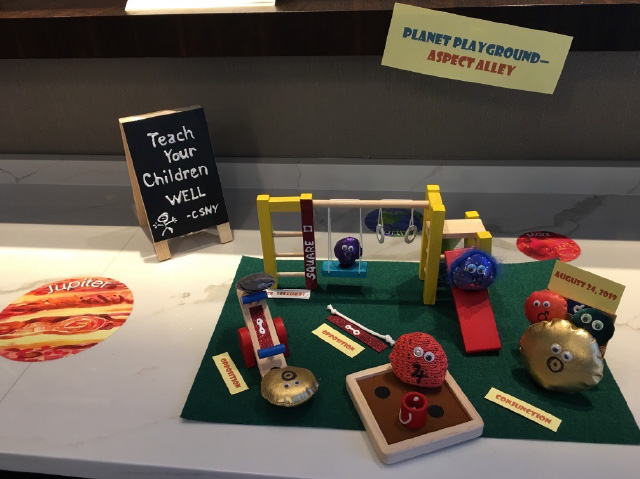 This more extensive display of the prototype toys was at the NCGR Conference (National Council of Geocosmic Research) at the Baltimore Hilton — Labor Day weekend in 2019. Here, in addition to the Pluff Planets, I introduced the prototype of the ‘Planet Playground—Aspect Alley’. Very small Pluff planets played and interacted with each other at the Playground.

The Planet Playground – Aspect Alley provides a visual of the planets’ positions in the sky, and allows for discussion of how planets/personalities would play with each other if they were to meet on a Playground. For instance, the slide is an easy (trine) interaction. On August 24, 2019, Mars and Venus were combust the SUN—these 3 planets are on the bench having a conversation; this chat is likely friendly; but a conjunction could also be heated, depending on the planets ‘talking’, and the Zodiac sign they are in. Uranus, on the slide, is in trine with the 3 planets

In September-October of 2019 I took a few of the toys to the Living Sky Astrology Retreat in Bhutan. While there the group visited the Bhutan School of Astrology in Thimphu, which was established in 1616 (!!) and is run by Buddhist monks. Lama Sonam Rinchen, the Vice Principal of the School introduced the group to the history of the school and presented his vision—he hopes to have Astrology taught in their public schools, beginning the pupil’s learning at age 7. 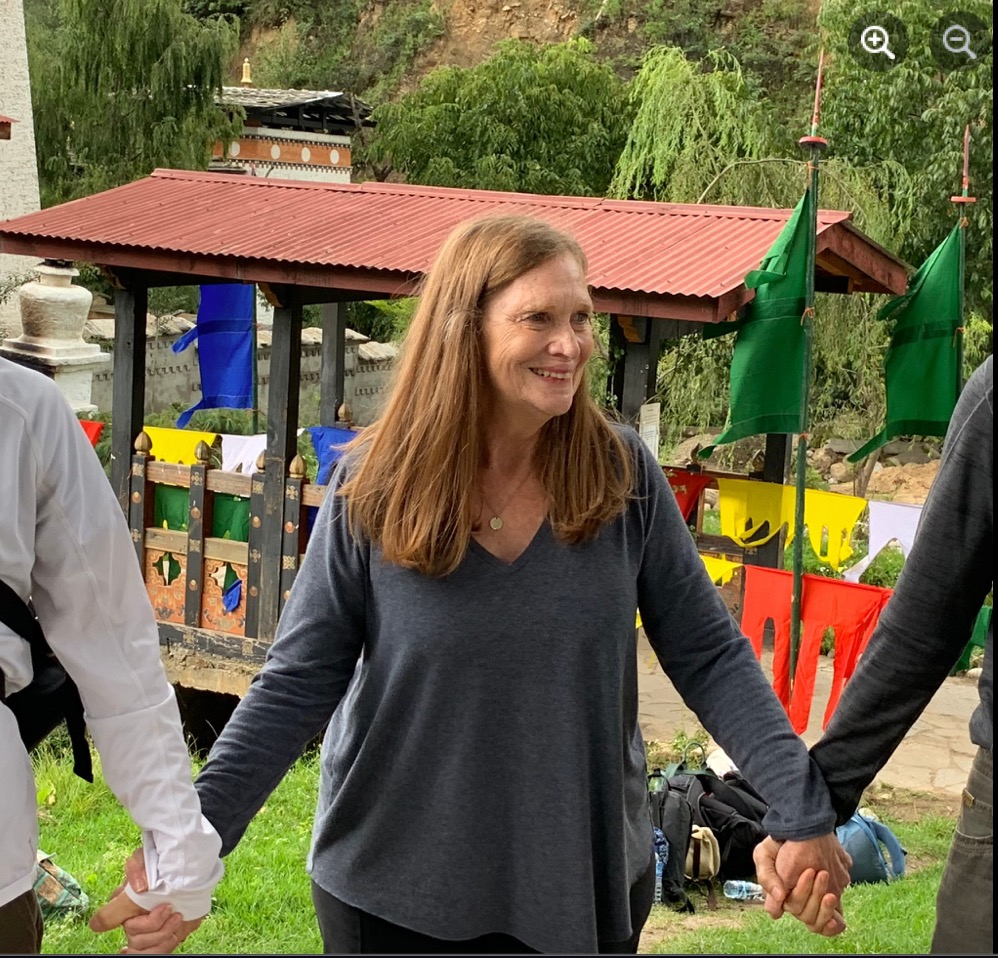 This was a perfect segway, as I had brought as an offering one of the Planet Playgrounds (similar to the photo above, but customized to include the Nodes and only the 7 traditional planets). I didn’t get to see the Buddhist monks’ response, but each time I think of their possible reactions, it makes me giggle! I know that the Vice Principal’s vision is being pursued at this time. 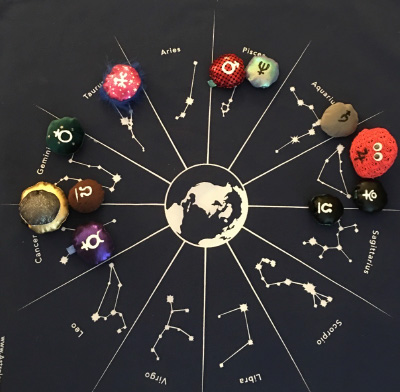 Then came 2020; the isolation caused by Covid-19 resulted in my having plenty of time to research, learn, experiment and play. The first ‘As above; So below’ Table Topper came into its own.

At first, there were small fabric planets to move around the customized fabric Zodiac chart ; Note the New Moon conjunct the North Node

However, the Covid-19 pandemic also forced me to focus on the ability for the items to be disinfected frequently. Little stuffed fabric planets are cute, but not ‘pandemic- proof.’ My amazing graphic designer who was ‘customizing the planet glyphs’ popped the idea of those cute, customized glyphs on BUTTONS, rather than embroidered on fabric as had been originally planned! Perfect! the buttons can easily be moved around on the Topper; they are personable, ’disinfectantable’; and they are far more reasonably distributed in large quantities. Personally, it also allowed me to break free from the sewing machine!! I also developed buttons for each of the Zodiac signs, which included the elemental colors, the sign name and the glyph.

‘As above; So Below’ Table Topper was upgraded to add elements and degrees.

Then in 2021 the ‘As Above; So Below’ Table Topper was upgraded with the elements and the 360º of the chart, adding several levels of learning.

In addition to the United States, the set is already being used in Bhutan and Costa Rica to teach children about the planets and the signs, etc. Astrologer-teachers are incorporating the set in their Astrology classes.

There is more to come!!